close
close
Close Back to Portfolio

Eating Our Fathers was a curated show by Stacey AS Pritchard, at the Chashama Space to Create in Matawan, NJ in May 2019.

Special thanks to Donna Kessinger and Christie O’Connor for their help and support with the show, and Tracy Coon and Tara Collins for their support and help with the salon.

I first conceived of this show when I ran across the bicycle seat and found the female form on the inside. I was reminded of Picasso’s Bull and this piece, as well as this show, developed from there.
I also was playing on Magritte’s “Treachery of Images” and the prevalence of male dominance and gaze in the art world.

Women were disposable muses: important as long as they suited him, dismissed when they had needs and wants of their own or became otherwise inconvenient. I’m still studying his life through various biographical accounts and that’s my impression so far.

I wanted to do a self portrait after his female nudes but without the idealized aesthetic that he imposed on his subjects. That was my rebellion against Egon. Instead, I leaned towards the grotesque side of his work.

I used 25 year old paper that I’ve been hoarding since dropping out of art school. Did several figure studies to warm up. Gesso around the figure outline. Gouache on the face and body. I wanted to push the gouache more with intense color but that terrified me, so I didn’t.

At the top are two lines from “Leda and the Swan”. Male gaze in poetry, romanticizing rape.

I think a lot about art and gaze, male artists and their female subjects. I wanted to confront the (male) gaze right back, to make visible a type of woman who typically isn’t chosen by male artists. Older. Flawed. Human. I invited the viewer in on my own terms. As an equal, or more.

Come and get it.

“No Strings Attached” is a play on words confronting relationships and the role between men and women. Over the years since curating a group exhibition titled “Misogyny is the root of all Evil”, a phrase that was coined by my friend and muse Kim Jacobs, I have been delving into my relationships with women. I have been also looking at how much our society has been and is socially conditioned to nurture and inflict a mind set that is misogynistic in nature.

What is so interesting is how much I was complicit in reacting and at times initiating misogyny and not realizing it. A great example was my preparing for the exhibit itself. My first choice was to gather women artists and colleagues to take part in this ground breaking exhibit and it was called to my attention that I was the only man in the show. I was asked why? At first I responded quickly with a “I don’t really know” as my answer. After some thought, I realized that I wanted to be the only man in the show to in a way be looked on as the enlightened one. Plus I got a rush out of all the comments giving me kudos for having the insight to push forward a feminine agenda. Misogyny and my ego was taking over… #misogynyistherootofallevil LOL!

So in a way I was the puppet master behind this whole artistic movement… that being the exhibit. So to remedy my findings, I asked several men to take part. This was to create a back and forth dialog between the men and women. It was also to include the problem… MEN. So the exhibit created a visual dialog and allowed men and women to approach misogyny is a creative manner. The men in the exhibit were forced to look within and find solutions by listening to voices and not be dominate, not take the lead and allow women to dictate the out come. My being the curator was actually just bringing people together. I allowed the women to in a sense guide me to the final outcome. It was a beautiful experience that has changed the way I view, interact and celebrate women.

This painting illustrates a man thinking he has control but since there are no strings attached to the woman figure, the lack of control is evident. The woman is inticing the man but she is in full control of her mind and body. I believe in a healthy relationship between a man and a woman there is a balance and the woman usually is in control. I say this because a woman allows a man in physically, emotionally and spiritually. This painting also illustrates the ugliness between men and women and when lust is the focus. I’m glad I didn’t paint over this painting because we need to confront these issues head on and I love initiating the conversation with art.

“Dream of Orchids, IV” is a subversion of masculine imagery and the “male gaze” as I explore gender fluidity, self-image, portraiture, and the feminine trope of orchids as vaginal stand-ins. One art father I’ve “eaten” is Man Ray. Primarily a painter, as am I , he’s perhaps best known for his photography, notably his portraits of women — friends, wives, lovers. He pushed photographic boundaries by manipulating the imagery of both his subjects and everyday objects into works he called “rayographs,” early precursors of digital arts made possible today by Photoshop and Illustrator, turning women’s faces and bodies into parts and pieces and studies. Perhaps most famously with “Violon d’Ingres.” Marcel Duchamp, friend and often collaborator of Ray, is also an influence as I give a nod to one of his “readymades” that is, to his repurposed portrait of Leonardo’s Mona Lisa entitled “L.H.O.O.Q.”

In this work, I am consciously and categorically both subject and object, the post-production manipulations under my control. I am my own male and female gaze.

Reynolds holds a BA from Sarah Lawrence College where she concentrated in Women’s History. At SLC, she studied painting with Richard Pousette-Dart, and printmaking with Ansei Uchima. She has a BFA and MFA from the School of Visual Arts. She has worked as an artist/teacher for Studio in a School, The Guggenheim Museum. The Folk Art Museum, and is presently employed at The Brooklyn Museum as a Gallery/Studio teaching artist. She is a painter, printmaker, digital artist, and performance artist. Her last one person exhibition was “nAsty womAn” at studio.ra in Rome

A Note on Names is a small forward that was written in the front of a copy of Beowulf that I typically use for collage purposes. It is a bilingual copy translated by Seamus Henry. The reason this page suddenly stood out to me is through its total lack of a female reference on the page. An occasional game, I sometimes will take out pronouns or especially female pronouns and nouns from a page as an experiment. There were none on this page. Given the subject matter and my focus on the prevalence of the male at the cost of the female, while putting together this show, it spoke even louder. Upon further investigation I came to find that the main protagonist in the story, a female, is actually never named. Her most generous reference seems to be as Grendel’s mother, all others are derogatory in nature. This piece represents for me a new consideration that has come from putting together this show. I look forward to adding the forgotten woman to my current lines of investigation. 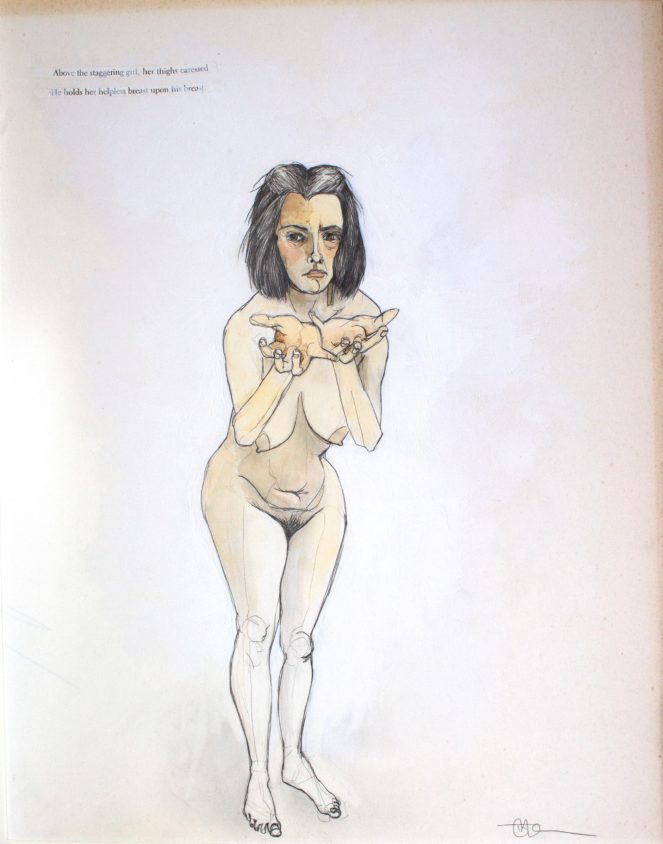 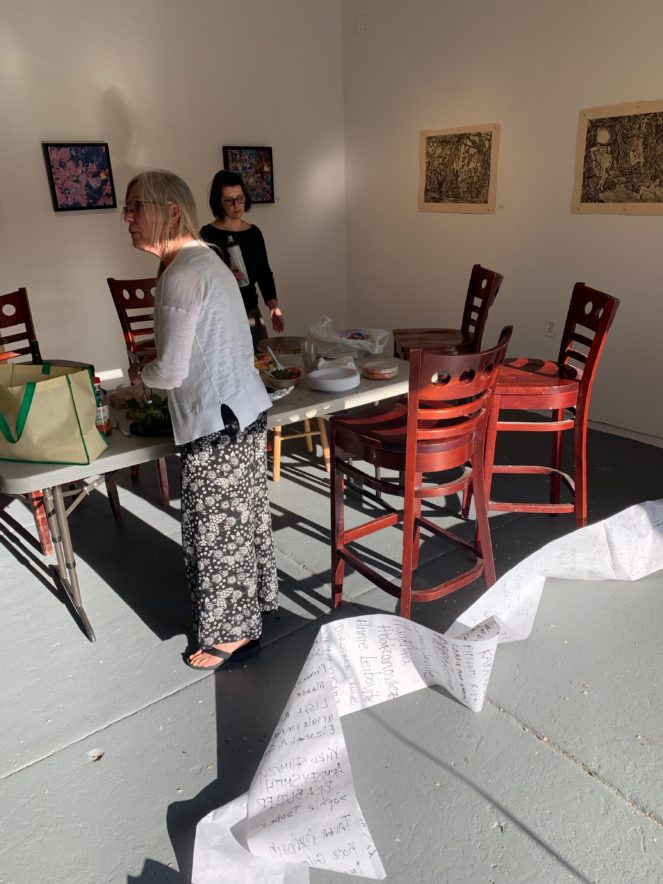 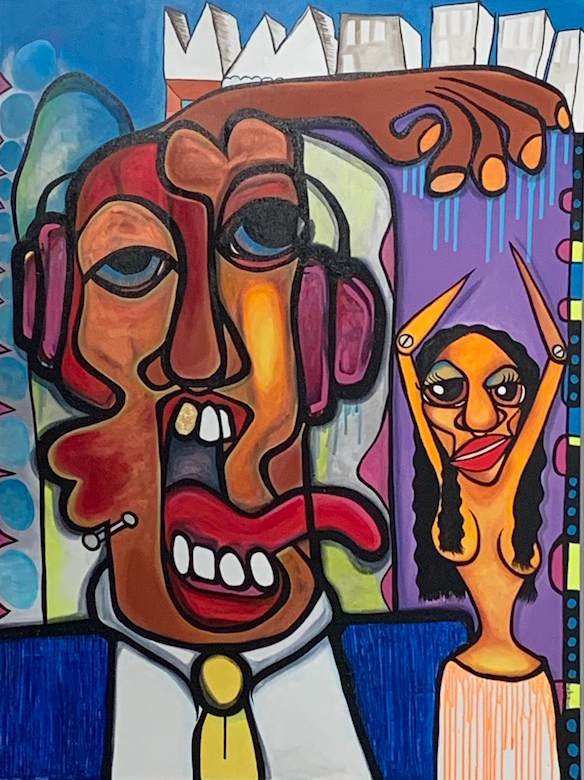 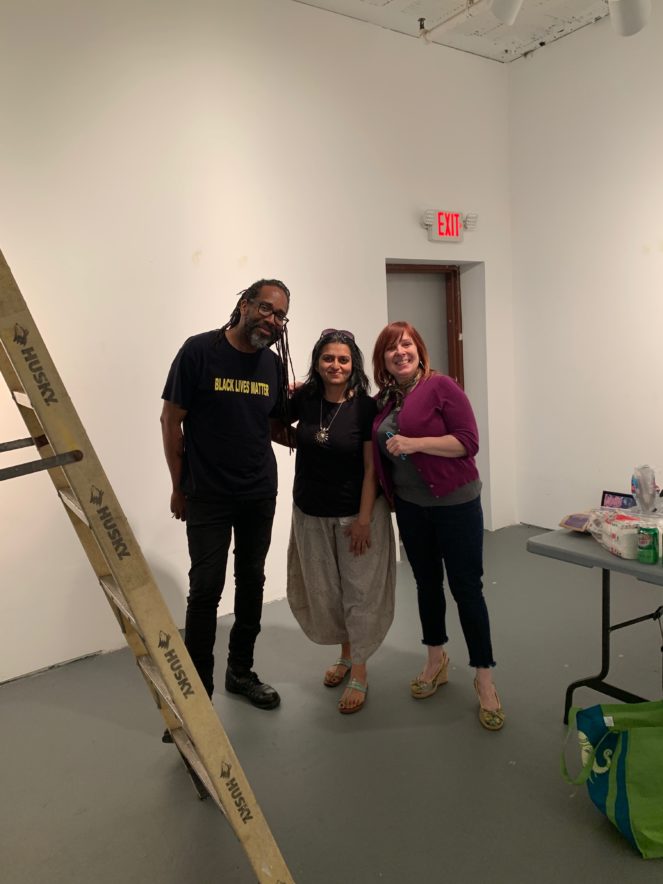 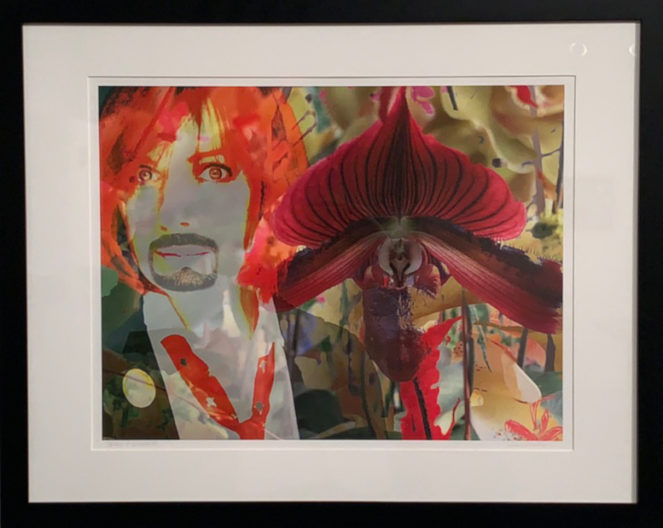 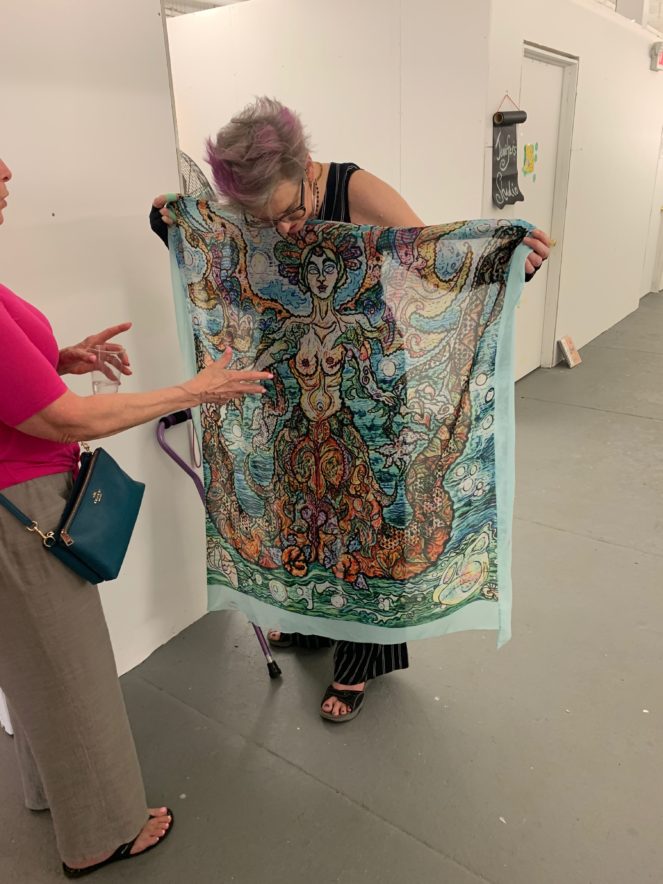 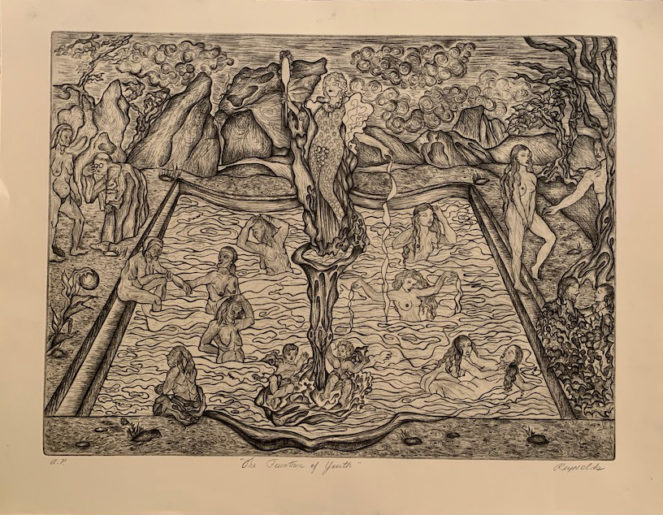 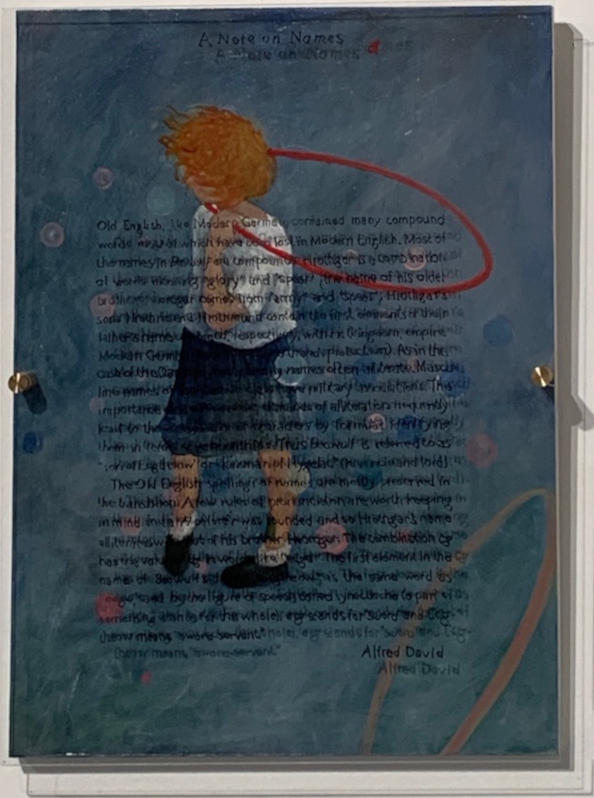